Roland Chadwick (born in Wollongong, NSW, Australia – 22nd May 1957) received a guitar for his 13th birthday and almost immediately began to compose. Indeed, his very first untutored sonic experiments produced results that would later form the basis for Song and Dance No. 1. After 3 years of guitar lessons and with no training in composition, he wrote Dances for Winter Oakwood, a suite of pieces still performed around the world to this day. He is one of England’s most prolific composers for the Classical Guitar.

As a recitalist, he made his début at the Sydney Opera House Broadwalk Theatre in 1998. Tours of Australia, Italy, England, Sweden, Mexico, and the USA followed. In 1989 he was Australia’s representative at Festival Cervantino in Mexico. Roland was a founding member of The Sydney Guitar Quartet and created the Paganini Project with some of Australia’s finest string players, most notably Hartmut Lindemann, the great German Viola player. Arriving in England in 1997, he gave concerts in the Philharmonic Hall with the Liverpool Philharmonic Orchestra and has played for all of the important Guitar Societies in England.

In 2002 he formed the Modern Guitar Trio with virtuosi Vincent Lindsey-Clark and Roland Gallery and composed a new and exciting repertoire for the Guitar Trio including Letter From LA, The Wendy House, Rococo Café, and The Memory of Water. The Modern Guitar Trio performed at all of the important Classical Music Festivals in England and Germany.

Roland Chadwick’s recordings with Steve Vai, Barriemore Barlow (Jethro Tull) and the English Chamber Orchestra are regarded as classics of their type. Other credits include: Mike Lindup (Level 42), Sir George Martin and the Britten Sinfonia. 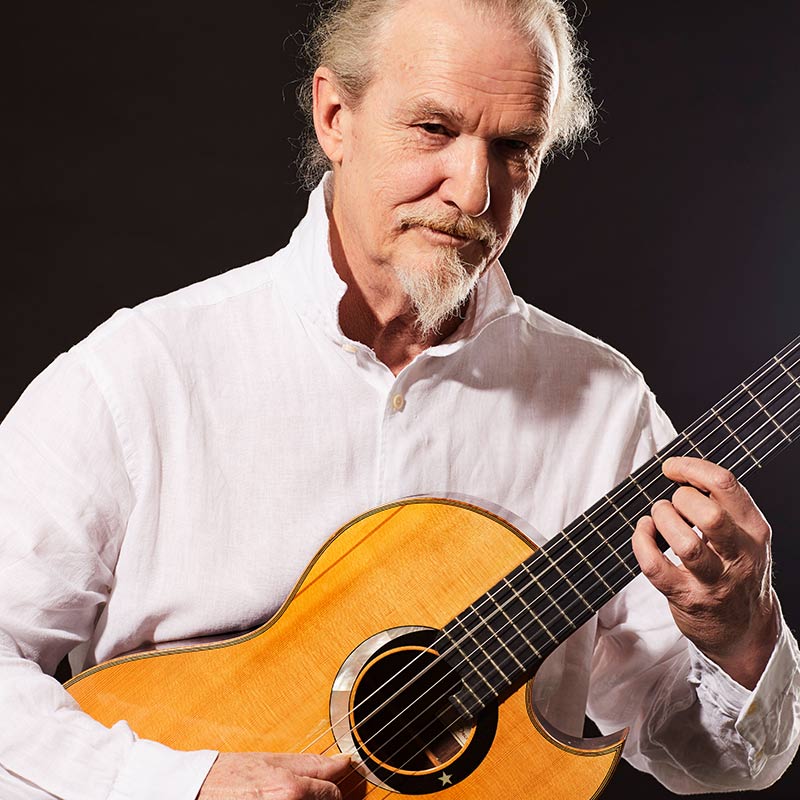 This is a quote from the liner notes of the 2019 CD of Roland’s music recorded by Detlev Bork:

“There are many composers who have entire CDs devoted to the performance of their music but, in most cases, they are dead or ridiculously famous before this honour is bestowed. I am neither dead nor particularly well known and yet I am singularly fortunate to have met the great German Maestro, Detlev Bork who has devoted many years of his precious life to the performance and subsequent recording of my music which is now realised on this CD. I shall be forever grateful to Detlev for his determination, patience, skill and the poetry in his soul with which he brings this music to you.

The music here represents a lifetime of composition from the early 1980’s (Partita No. 1) to the present day (The Study of pi), some 40 years. As Detlev and I recorded these pieces in the summer of 2018, it was as if 40 years of work was compressed into just one precious diamond of time with all the faults of my youth and gains of my maturity standing in one place for me to observe, enjoy and suffer. I truly wish all those dead composers had been able to have that wonderful and yet completely frightening experience!”